Last week I sat down to interview two of Griffiths very own girls studying fashion. Rachel Browne who is in her second year and Liz Bennnet who is in her third and final year. Both optimistic about the fashion industry with a clear and obvious dedication given the long hours there course entails which involves heavy designing picking fabrics and creating there own clothes. After a very insightful and enjoyable  chat it was obvious both girls are going places and are extremely dedicated to learning and broadening there craft when it comes to fashion. Liz has high hopes for the future as she takes off for New York and onto an internship after in September. Rachel is giving herself final year to figure out her niche area.

Firstly I asked the girls what they had learnt so far from the course. Rachel responded saying “Griffith has taught me to broaden my imagination, the things I thought of before were creative to an extent, but now I know so much more. I look at magazines and fashion blogs where before I wouldn’t have”. Liz explained to me that before she thought the course would involve more just pure drawing and designing but she learnt “They teach you to broaden your mind”. Liz has a learnt a whole new way of developing thanks to skills she’s has obtained like photoshop illustrator in college.

When I put the question to the girls if they were worried about working in the fashion industry because it is so notoriously bitchy and cut throat both of them calmly responded they weren’t particularly. Rachel said she’s ready but feels she may have underestimated it, but she’ll be ok when she reaches that point. “Final year has been a good eye opener into how hard it is going to be. There is so much criticism but you have to learn to take it constructively not personally” says Liz, who has a very realistic and optimistic take on things. What she said would remain true for any budding designer .

The girls reminisce on the last year, for who has earned there spot for fashion icon of 2012 until this point. Both agree on English model Cara Delevingne who has won model of the year and shown us how versatile she is in her style on the runway and off. Liz agrees both Cara and Rihanna are her two favorites. “I love the new street phase and grunge elements they lead in”. Rachel’s winner is some what different in her dress sense and chooses Kate Middleton. “She elegant and everything fits her well”.

Hats are a must for chic everyday wear

The girls and I discuss designers Rachel is a D Squared fan because it’s cool and funky while Liz adorns Givenchy haute couture and looks forward to there Spring/Summer and Autumn/Winter shows. Her favorite ready to go designer is Simone Rocha “Her style is young and fresh ad the fact that she’s an upcoming Irish designer”. Both of the fashion students agree when taking it high street Zara and Top Shop serve the best.

To style Liz would pick Beyonce “I love her and think she would be so cool to design for. Her concert outfits are so out there and different”. Rachel chose Kate Middleton “everyone sees what she is wearing and everyone is interested”.

Just to make sure there is no confusion about what to wear this summer no better people to ask then two who currently eat,sleep and breathe fashion! “Neon” Rachel responses enthusiastically as if thats it she’s said enough that’s how important it is so factor into your wardrobe! “Neon muted down with lace not like blocks of it like last summer”. Liz nodes and agrees “Monochrome black and white with a pop of color also suit jackets with nothing underneath”. Presumably very safely secured!  A little white dress to add to your must have summer purchases the girls advise and Liz also suggests a pair of statement sandals “they add something to any plain outfit”. Lastly the recommend hats and lots of them!

A little White dress can do no wrong the girls agree

For the girls although fashion is the chosen path for them they seem keen on expressing not to take it to seriously. They see it as a form of expression and it s what you make it. “It’s really important in how you present yourself” says Rachel. She adds “it’s the first thing people see”. Both students agree a necessity in fashion is being comfortable in what your wearing.

Neon the fashion forward way they urge for summer!

Looks great with black, two in one here as Rachel suggested with lace also!

While fashion is fun the girls are not oblivious to the down falls of the industry such as child labour, making leather and the horrible mutation that is carried out on animals for there fur or testing. The harsh realities of this are pretty shocking as well as upsetting. They explain how there lecturer just uses faux fur and leather and hopefully most fashion students will lead by example because of that.

The future is bright. Rachel tells me how she would like to kick Anna Wintour out of her job in Vogue eventually but before that happens just to find out what she is good at and enjoys, the perfect logic. Liz is unsure where she will lead weather it will be styling, buying or designing but hopes to figure it out next year in London. Im sure the girls will be on our radar in no time. Watch this space!

Kiera Knightley is set to marry today in just a few hours according to sources. The well known British actress go engaged last year to James Righton after the pair were introduced by her good friend Alexa Chung. The wedding plans have been very hush hush over the last few months but it has become quite obvious that it will be in France today. The Mail Online has reported a large number of marquees have gone up in Mazan in the South of France.

The 28-year-old Pirates of The Caribbean star was photographed in a French airport greeting him as the affectionately showered each other with kisses while she looked relaxed and happy in a pair of dungarees. glasses and stripped top. After the to be couple hoped in a car with her mum and took off. They have apparently warned there guests to arrive separately and in small groups not to draw to much attention. The biggest question on everyones lips naturally is who shell be wearing. 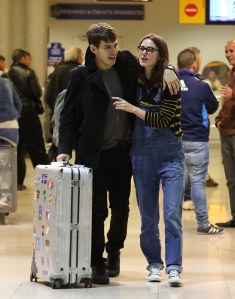 The Prime suspect at the moment is Chanel for many reasons.Rumors have circulated that the labels director and potentially fashions most powerful man will have custom Chanel made for the Hollywood star. She has been the face of Coco Mademoiselle fragrance in both a major ad commercial and several campaigns. The Atonement star has also had a long relationship wearing the brand for red carpet events. My money is on Chanel. A feast of celebrities will be wined and dined a all night undoubtedly.

Can’t wait for the photos of the nuptials to follow.

The very famous Chanel ad she featured in 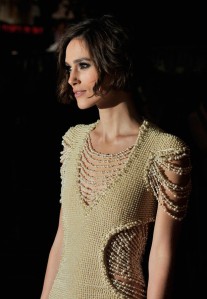 Kiera and Karl will she wear CHANEL?

Welcome to my blog! I am Aoife O Doherty a fashion Journalism student from Dublin studying at London College of Fashion. I got my BA in journalism in Dublin after three years of studying. I’m 22 an animal, celebrity and fashion lover as well as  optimist obviously I love writing  so feedback, comments interaction are all welcome and I hope you enjoy x

Karolina Kurkova dawned this beautiful low cut black top and embellished skirt at the festival. A potentially risky choice maybe for your everyday girl but not when your a supermodel. The supermodel looks perfection and totally immaculate in the tuxedo ensemble. I love how she teamed it with simple black shoes and her choice of clutch. Hot or Not?

Photo from the fashion bomb blog

Her Blumarine Tuxedo dress is Fall 2013

Simply elegant or simply to much?