Manolo Blahnik recently said if he was queen for a day and he could ban any trend right now it would be platforms. As one of the most successful and worshiped shoe designers he would know. But I can’t help but despair because I adore the ugly shoe.

Arguably there are some outlandishly ugly shoes at the moment but they have so much to offer. Designers such as Stella McCartney, Jill Sander, Sandro, Miu Miu, Prada and Celine have shown us from the catwalk how it’s done. Yes I am aware that we are not all 6ft tall lampposts but in terms of practicality it seems like a savior has spoken.

I have fallen victim to the unimaginable and am head over heels for what I can only describe as my new venture into orthopedic heaven. The transition from high heels to the safer option of a clunky unfeminine shoe has been a decision I have not regretted despite some abuse from my fellow peers.

Admittedly I detested and was very critical of the over powering clunky, less than pretty shoes until I bought my first pair of creepers pre summer followed by my mannish stable biker ankle boots which offer more than enough stability circa wine o clock.

Teamed with tailored cigarette pants, jeans, shorts or feminine dress they add the chic boyish vibe we all crave this Autumn. Paired with an oversized coat they offer the height needed to carry it off, especially if you’re the size of a garden gnome like myself. From creepers, to thick brogues and platform styles this will add shape to many of this season’s attires and provide the androgynous feel similar to the runway.

Celebrities such as Alexa Chung and Chloe Sevigny opt sometimes to combine socks with their multiple varieties of the shoe. We’ve had it engrained in out heads with our moral fashion compass it is a no go but these girls demonstrate quite the opposite. The sock shoe combo is actually very manageable and quite chic. We applaud girls who manage this look while still covering up the ugly feet panic or dreaded toe cleavage.

Aside from helping out the vertically challenged they offer huge comfort while adding length to the leg so you can still remain hot property. These shoes are reminiscent of the 60’s and early 90’s the edgy cool kids choice was usually a platform that spoke for itself in a rebellious bid to turn heads. The cycle of fashion moves backwards as much as forward it would seem.

If you’re one of the lucky minority who can splash the cash on a pair of Miu Miu’s or Stella’s faux leather stabilizers for £685, lucky you! For the rest of us who don’t have time for piggy bank collecting, don’t fret as the high street is our answer. Topshop has various colors and styles so you don’t have to repent for you’re out of season kicks.

When Pheobe Philo revealed her new collection of quite unattractive shoes in 2011 some critics almost thought she was joking while others lusted after her for the reinterpretation of the Birkenstock shoe (A fresh pedi is always necessary for an open toe even if it is a Birks). We now have also been introduced to Teva, Birks’ equallyugly relative which Philo spread all over her 2014 S/S catwalks. 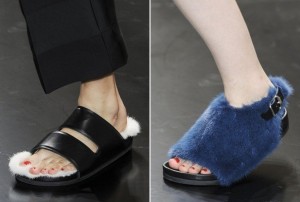 Ashley Olsen teamed her Birks with a dressed down shirt and jeans combo but then the nimble singer added her $35,000 backpack! Surely then all questions of wearing birks go out the window? It would seem the conventionally ugly shoe isn’t just for in doors or pottering around the garden.

These shoes offer something “cool” about the looking “uncool image”. They reek of nostalgia and even demand some attention. Is it too far fetched to think crocs could creep into our wardrobe next? “Fashion is a form of ugliness so intolerable that we have to alter it every six months”, said Oscar Wilde of short lived mini trends.

From 90’s show Clueless, to pop princess Britney Spears and currently Nicki Manaj we’ve seen how it’s been demonstrated with so much variation and choice now it’s a matter of which one. How long is this trend here to stay for? That’s a difficult one to answer but if Philo is still putting them on her runways for Celine that’s a good enough sign. Simone Rocha opted for a thick pink shoe platform that looked effortlessly cool previously for her Respect Your Elders show, which went down a treat. Flashback Prada 2011 was ahead of the game with S/S “flatforms” so there has been signs for some time now.

Just remember you now have the advantage of availing of a comfortable shoe and no long term pain for your later years if you choose to let your feet be at peace this season. Lower chiropodist bills and descretley smaller corns while still looking fabulous. There just so bad there good! Haters goina hate!

Below Prada and Simone Rocha 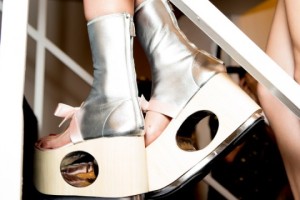 With the much anticipated  arrival of New York fashion week nothing has disappointed to date and along with it came a hoard of celebrity crushes, iconic designers and  more media coverage to keep us not so fortunate goers involved. New York is one of the fashion capitals of the world so where better for buyers and the media to witness previews of what’s in store for 2013. Each day has brought us the hottest trends to grace the runway from some of the worlds biggest designers. An array of pastel, neons and the studded kitten heel comeback draped with sinfully attractive accessories. Every show has offered something desirable to all women regardless of personal style to add to the collection of timeless pieces.

The irresistible collection from Victoria Beckham

Victoria Beckham has been planning to unveil the crisp clean tailored look which includes whites, reds and blacks for her simple chic S/S 13 collection. She has been applauded for her attention to detail and designing for her customers as opposed to her iconic style. She has even choose Manola Blahnik over Christain Louboutin to design the flat shoe, something she is so early seen in.

It’s all about volume control this Spring. Designers such as Miu Miu and Chanel are opting for the unstructured feel. Hermès have shown us elegant and exotic detailed prints attractive to any shopaholic.

The gentle drapes and ruffles from Dior, Céline and Chloé mark a new millstone of femininity. The newly adapted minimalism look is fresh and pretty for the season and is right on trend with the less is more idea.

The crop top has made it’s way from high street to high fashion steadily. Always appropriate for summer and still beautiful with simple jackets and high waisted trousers for the not so brave women. Miu Miu, Balenciaga and Balmin have demonstrated this vision in there shows.

Check out all the latest Catwalk shows from New York fashion week on the comfort of your couch with just a touch of a button nothing disappoints! 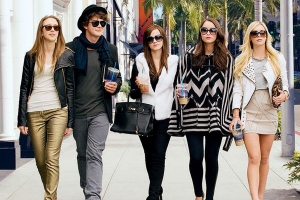 The film the “Bling Ring” is out this June

Emma Watson is playing Alexis Neiers in the much anticipated Summer film that depicts a story of the Beverly Hills teens based on true events. The “Bling Ring” as they have been so infamously labeled robbed homes of celebrities on several occasions. In 2009 there is estimated robbery for the year was said to be around $3 million in belongings as well as ca$h. Famous heiress Paris Hilton was a main target as well as Lindsey Lohan, Rachel Bilson and Hills reality star Audrina Partridge. Footage shows a man and woman grabbing everything in sight wearing hats and gloves in Partriges released tapes. The story unfolded before the affluent teens eyes and soon enough video footage and prints all pointed at the over exposed teens. It seemed like all they wanted was fame, money and ultimately to be a part of the Hollywood scene as they were rich and already partying way beyond there means and age. Alexis Neiers had a reality show on E where she attempted to be seen as a troubled good girl gone wrong but consequently looked like a total brat. She assisted in robbing Orlando Blooms house which she was caught fleeing the scene with stolen possessions. She is now facing three years probation and has served 30 days in prison. The film is set to come out this June. Paris Hilton plays herself in the film. These notorious events at the hands of a couple of high school teens has made history. The Bling Ring slowly became identified by police as surveillance footage revealed them one by one as it built up from numerous celeb CCTV cameras.That was the first break but the culprits were over heard several times bragging loudly about the high valued goods they had stolen in there private school and it didn’t take long for tip offs to ensue. Nick Prugo one of the main ring leaders has been charged with 7 accounts of burglary. All of the upper class teens equally searched for acceptance in the LA high school were popularity was everything. Once they got a a taste they just couldn’t stop! Whenever Rachel Lee wanted a new outfit or ran out of money for drugs they would rob or as she liked to call it “go shopping”. It all became an addiction of stealing , living on the edge and adrenaline. Cant wait to see the film 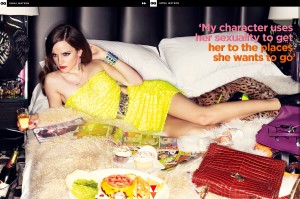